Born in most famous Bollywood family in Mumbai, Maharashtra on September 21, 1980 Kareena Kapoor is also a popular and established actress in Bollywood. Best known for doing different genre roles and for bringing the size zero figure trend in India Kareena is one of the highest paid actresses in Bollywood. She made her acting debut with war drama “Refugee” in 2000 opposite Abhishek Bachchan. Movies was not a big hit but Kareena was noticed for her beauty and acting. She went on to star in many films but her first major success was “Kabhi Khushi Kabhi Gham”. She established herself in Bollywood with a series of hit films and has won six Filmfare Awards so far.

One of the highest paid actresses in Bollywood Kareena is very conscious of her fitness. The ever glowing beauty made the zero-figure a big trend in India. She used to be a heavy girl but when she got the movie “Tashan” she worked really hard on her body to get the perfect zero-figure to don a bikini. Now she just maintains her body and beauty with proper balanced diet and regular workouts. Let’s have a look at Kareena Kapoor’s workout routine & diet plan.

She is a hardcore vegetarian, so she includes all the nutritious vegetables and fruits in her diet. She believes food consumed in a day should be proportional to physical activity during the day. Her diet includes 5 meals a day. Kareena Kapoor’s diet plan comprises of- 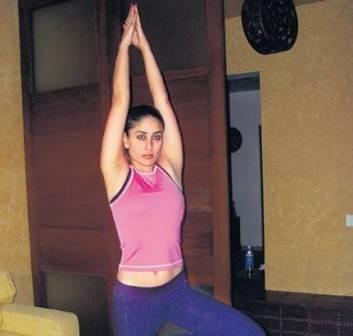 Kareena Kapoor is an inspiration for anyone who wants to lose weight. She didn’t follow any crash diets to get her zero-figure instead she worked hard on her body with intense workout and yoga to attain this level of fitness. She exercises for two hours five days a week. Kareena Kapoor’s workout routine includes-