Chris Gayle is known to be one of the most dangerous and destructive batsmen. He can make or break any game all by himself. He is a true example of ‘one-man army.’ Such a strong and powerful man in the game of cricket has to work really hard to attain and keep this position.

Like any famous and successful person, Gayle too has a role model. He proudly tells the tale of how his career is inspired by a woman, he very own teacher, and coach from his school, Kingston. He shared, “She kick-started things and gave me that kind of self-belief. Most of the time, as a kid, you are nervous, and she would notice it and try to get in your head and give you confidence. She was also our football coach, so she was very talented and to have a woman lead you at a young age was good.”

Looking at his fine set of abs and amazing his body transformation, it is evident that Chris is a true fitness enthusiast. He spends hours working out in the gym. He starts by warming up, light jogging and running followed by sprinting. And of course, cardio! In fact, he loves to dance, and that is his fun cardio exercise. He then proceeds to his gym workout. He also practices improving his batting and fielding skills in the field.

Most of his training is strength oriented. Leg strength is the most crucial aspect of a batsman. One needs a lot of running during the match to score quick runs. His strong focus is on his legs, muscles, and abs.

When asked how he generates so much power in each one of his cricket matches, he replied – “A good cricket bat and a nice workout in the gym is all you need. You need to build your muscles, work on your intensity and hit balls in the nets. However, it is not going to happen overnight. You have to work towards getting what you want.” 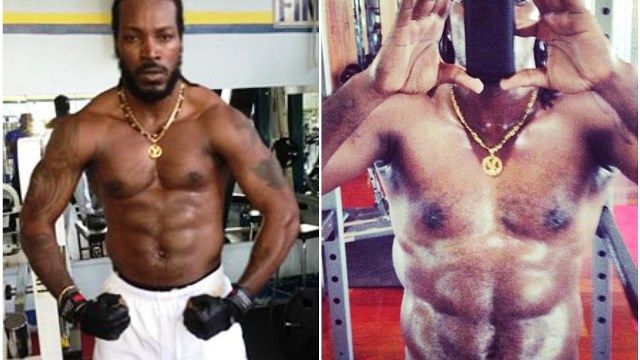 Breakfast is the most important meal of the day. And Chris Gayle makes sure he has a healthy and nutritious breakfast so that he gets a good start for the day. A major portion of Chris’ diet consists of fruits and vegetables. Having fresh fruit is important for a healthy stomach and hence, healthy body. He is also quite conscious about keeping his body hydrated, be it with water, juice, lemonade or any other healthy fluids.

He does cheat on his meals some days and pasta is his go-to food. When asked by an Indian reporter about his views on Indian food, he humorously said, “I love India, but I try to steer clear of Indian food as it is too damn spicy for me!” You also have to take care of too much masala and spices in your food. Excess of anything makes it unhealthy.