Born on July 18, 1982 in Jamshedpur, Jharkhand, Priyanka Chopra is a leading Bollywood actress, singer and former and a former Miss World. She took part in Femina Miss India contest and finished second. Subsequently she was sent to Miss World 2000 Pageant where she won the Miss World 2000 crown. After winning the title Priyanka started getting film offers and made her acting debut with Tamil film “Thamizhan” in 2002. Her debut movie in Bollywood was “The Hero: Love Story of a Spy” in 2003 which failed at box office. Her first box office was “Andazz” which also won her Filmfare Award for Best Female Debut. She subsequently gained critical acclaim for her negative role in “Aitrazz”. Priyanka is known to portray different genre roles and has won many awards for her performances. Apart from acting this beauty queen has a beautiful voice. She released her first single “In My City” in 2012 and her second single “Exotic” was a big hit.

Priyanka Chopra is been in lime light from a young age and has maintained her fitness throughout her career. The charming beauty is always conscious about her fitness and takes very good care of her body and looks. She follows her workout routine religiously and her diet plan also helps her maintain her toned body. Let’s check out Priyanka Chopra’s workout routine and diet plan.

She follows a simple and balanced diet. She eats something in every two hours to keep her metabolism rate going and to stay energized. Priyanka Chopra’s diet plan includes- 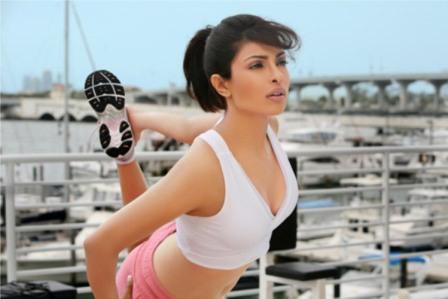 She is blessed with a lean sexy figure. She does not put on weight easily so she doesn’t need to work too much on her body. But she is very passionate to stay healthy and fit and workout for an hour four times a week. She is not a regular gym goer but she never misses her workout. Priyanka Chopra’s workout routine includes the following-