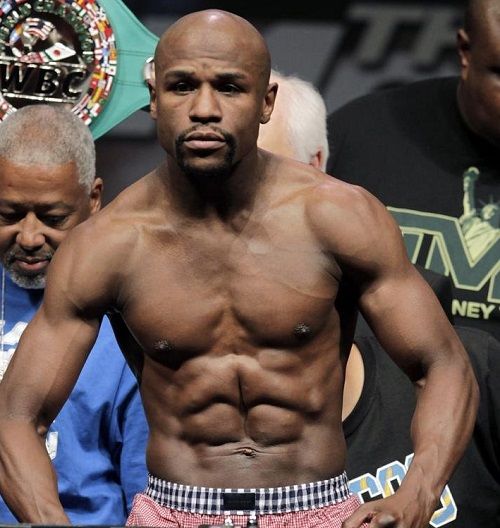 Floyd Mayweather is a bad ass and intense looking man who doesn’t see anyone around him once he starts training. He is often called by the title undefeated because of his 48-0 score in a fight or rather battle with Manny Pacquiao. This fight is still recalled as the biggest and deadliest fight in the history of boxing.

Floyd trains in the gym with 50-60 people around him and boy that is one hell of a sight to watch! However, even with so many people around, he trains with extreme dedication and concentration like it was just him in the room. He says, “A thousand people want you to say hi or take pictures, but I don’t come to the gym to take pictures. I come to the gym to bust my ass and work hard to be the best that I can be.”

Now if you’re planning or even thinking to train like the undefeated boxer, let me warn you it’s a hard core tough 40 rounds workout routine!

Here are the equipments that will be required for the training –

To begin with the routine, Floyd goes for three rounds of shadow boxing, practising footwork, practising punching, movement, stance, speed and technique. This is how warms up his body to help prepare it for the exhausting workout that’s coming next. You can use weights after the second round but spend at least two rounds just practising your form.

Now here, Floyd uses the help of his uncle Roger. Floyd spends ten or fifteen minutes hitting hand pads with Roger. And when the Mayweathers are at work, they don’t count time. Instead Floyd and Roger work in silence, hitting hand pads and working on combinations and speed. Well now that Roger is getting older, Floyd sometimes practices with some of his gym buddies.

Floyd practices this round with his co-trainer, Big Nate. He works on his short jabs, right hands, his hooks and his uppercuts spending a good 10 minutes. 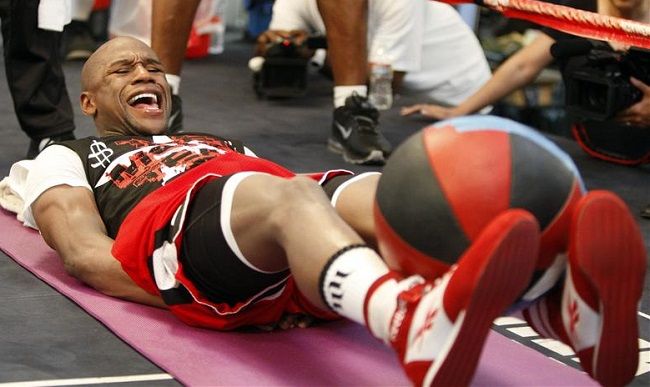 Floyd uses a heavy 160 pounds bag with various combinations to practise with for about 15 minutes. He performs 4 rounds of the heavy bag workout focusing on speed and technique. When throwing your punches, always remember to turn your body through the shot and turn your hand over at the moment of impact.

We have reached mid way through Floyd Mayweather’s routine. He trains with his uncle Roger for another 15 minutes working on combinations of slips and weaves. They don’t count any numbers here as well. Floyd stops when Roger stops. You might want to start by counting though so that you know how far you are going.

For this round Roger is switched with Big Nate who comes back into the body pads. Now Big Nate is a heavy man which we take from the name. If you cannot find a man as heavy as him to assist you in the body pad round, you can do the heavy bag workout instead. Whipping in those body shots will really work your core muscle group.

Floyd now transfers over to the Heavy bag for some hardcore endurance work. This is where you need to be doing ten 1-2’s in a row and then try to do ten left right hooks, then ten left right uppercuts. Do this for a full round and take a breath, then do it again for the next round. Focus on punching and not worrying about throwing properly.

Floyd will train with Roger again here with full concentration and no disturbance. He focuses on speed now and not strength. You need to work on them both.

Now he removes his gloves and heads over to the speed bag for three rounds. Floyd doesn’t get tired easily but a normal person sure would be exhausted by this time. Take a break but carry on.

Now Floyd spends three rounds skipping and all kinds of skipping, double jumps, criss-crossing, everything all together. Skip till you’re wet with sweat.

You have to continue skipping, but this time with 3 to 5 pounds of weights to your ankles. It is hard but it’s all about the sicipline.

Next round, if you can’t do anymore, switch to five pound weights, and for the third round. If you absolutely can’t do anymore with the fives, you can go down to three pound dumb bells.

First round consists of 50 ab roll outs and then 200 Sit-ups. This is to be done twice. You will feel your body ache if you have reached here but don’t lose your rhythm, you are doing well.

Attach the neck harness and do up and down neck raises with 25 pounds attached to your harness. Raise 50 times, then take a break. Do this for between 3-6 sets in total. As a boxer, it is very important to build neck strength.

Three sets of 50 push ups finally finish the routine. This is it, the complete 40 roung Floyd Mayweather training. 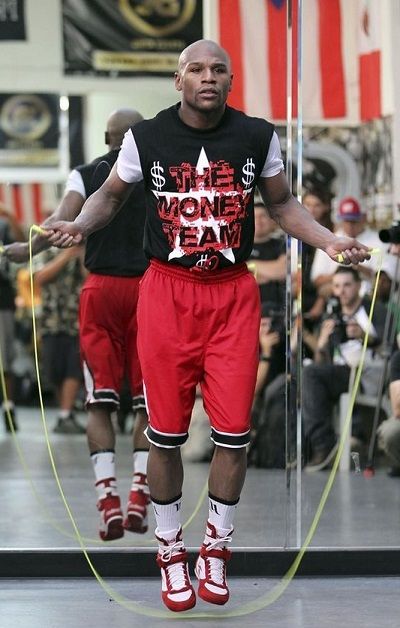 Floyd is very strict about eating organic food. He loves broccoli and he loves things with flavour. He keeps himself stocked up with protein and carbs. Breakfast is an important meal for Floyd and he usually has eggs, home fries, grits, bacon, turkey sausage, turkey ham, turkey Kabasa, and pancakes. Apparently, before a fight, Floyd Mayweather eats a lot of spaghetti Bolognese. The rest of his favourite foods include BBQ chicken and baked chicken with rice and gravy. He also likes to have lots of fresh juice in a day. Otherwise, Floyd does not have a fixed diet. He just focuses on eating healthy and nutritious food and to keep him well hydrated with water. One day all he ate was bananas and all he drank was water. And of course, once a while in his cheat days the boxer loves to eat Top Ramen Noodles. It’s what he had growing up and it’s been his favourite since childhood.